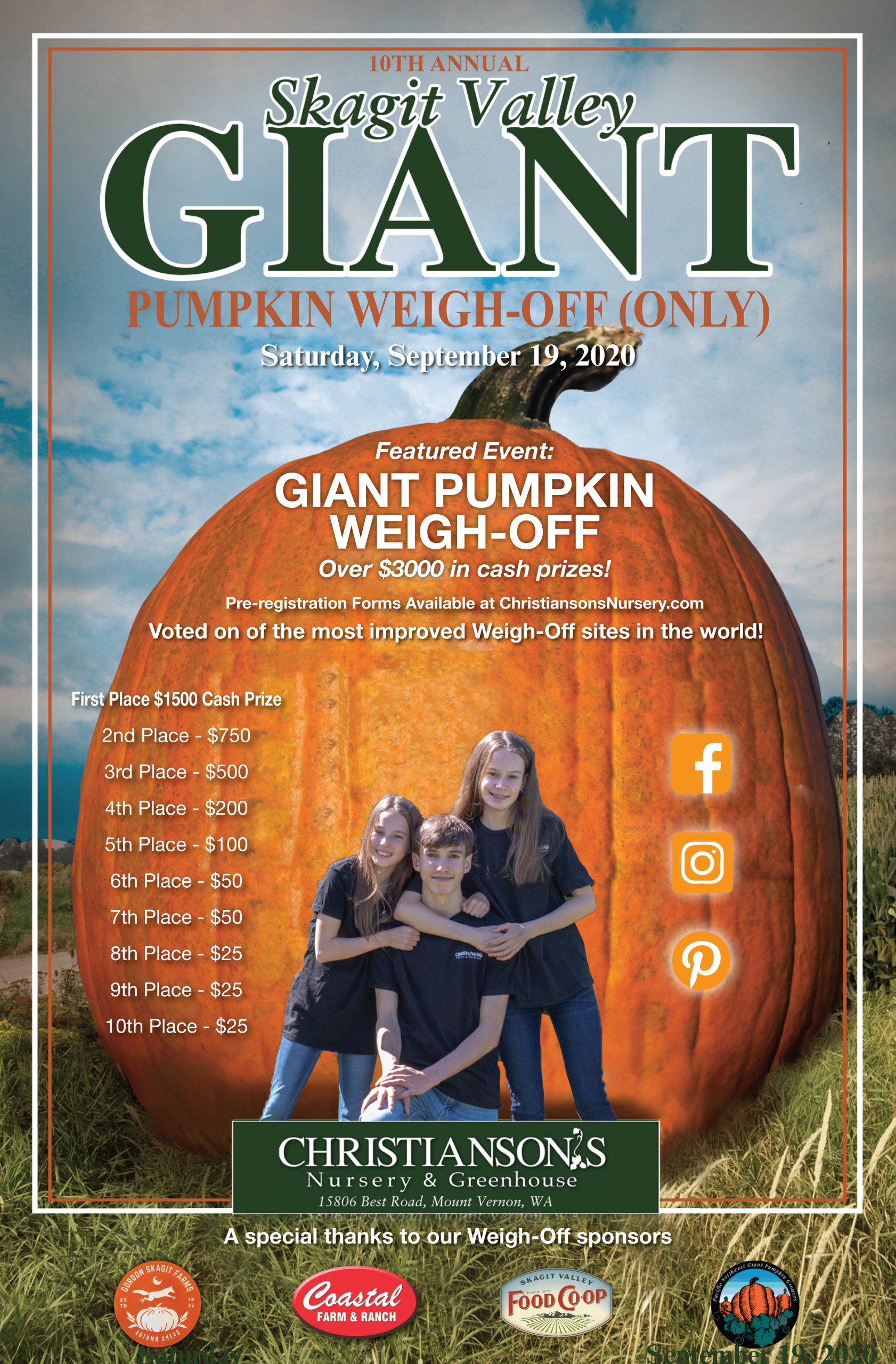 As you may already have discovered, this year’s Skagit Valley Giant Pumpkin Festival in its traditional form has been canceled. As much as we regret having no community celebrations, we are now taking pre-registration forms from growers to compete in the Weigh-Off (only) and will award the top-winning cash purse prize of $1500.00 to the grower with the heaviest pumpkin!
Have you ever wondered which variety of pumpkin our competitive pumpkin growers grow? The original ‘Atlantic’ pumpkin seeds were developed by Howard Dill of Nova Scotia, Canada. Dill was determined to win a giant pumpkin contest and we assume he won (and harvested the seeds) since they are now coined as “Dill’s Atlantic Giant; World’s Largest Pumpkin Variety.” These seeds are not your average off-the-shelf packaged varieties. Howard Dill’s ‘Atlantic’ seeds are mainly ordered online or through a grower. They are extra-large seeds that have an extra thick membrane covering their vulnerable insides. The seeds are prized by today’s growers; some bring a giant value up to hundreds of dollars per seed!
Tip: Before planting an ‘Atlantic’ pumpkin seed, sand off part of the glossy membrane on one edge using sandpaper to ensure optimum germination.
Interested in growing a giant pumpkin for next year’s Weigh-Off? Consider becoming a member of the Pacific Northwest Giant Pumpkin Club!
Learn more about Pacific Northwest Giant Pumpkin Growers
Dill’s ‘Atlantic’ seeds produce fruit weighing 200 to over 1,000 pounds and can grow up to 2-inches per day during their peak growing time! How is it that some growers can nurture an ‘Atlantic’ variety that weights up to 2,500 pounds (as achieved by the current Washington State record-holder, Joel Holland)? Skilled growers have a lot of the answers; some use seemingly over-the-top methods such as hand-pollination, nursing them along on cushioned sheets of plywood, or place electric fans in the garden to cool the monstrous fruit so it doesn’t crack or split while putting on those extra pounds. Yet, some factors are ever-changing such as the correct level of nutrients and moisture in the soil; as well as rain, wind, cold, and heat. These variables require a change-up in tactics to ensure the cultivar’s maturity. All this demonstrates the extraordinary determination and moxie that competitive growers hurdle just to be in the running of an annual Weigh-Off.
The Skagit Valley Giant Pumpkin Festival is a sanctioned Weigh-Off through the Giant Pumpkin Commonwealth (GPC)
Be sure to watch segments of the Weigh-Off live on Facebook Saturday, September 19, and discover who wins bragging rights and reigns champion for the 2020 Skagit Valley Giant Pumpkin Weigh-Off.
Like our Skagit Valley Giant Pumpkin Festival/Weigh-Off page
and watch the giant highlights!
2020 SVGWO Pre-RegistrationForm

Submit pumpkins, squash, super-size garden vegetables (zucchini, tomatoes, gourds), and flowers! At the end of the Weigh-Off, we will hand out prize money to the top 10 growers on-site and mail out prize ribbons to your home.
September 11, 2020