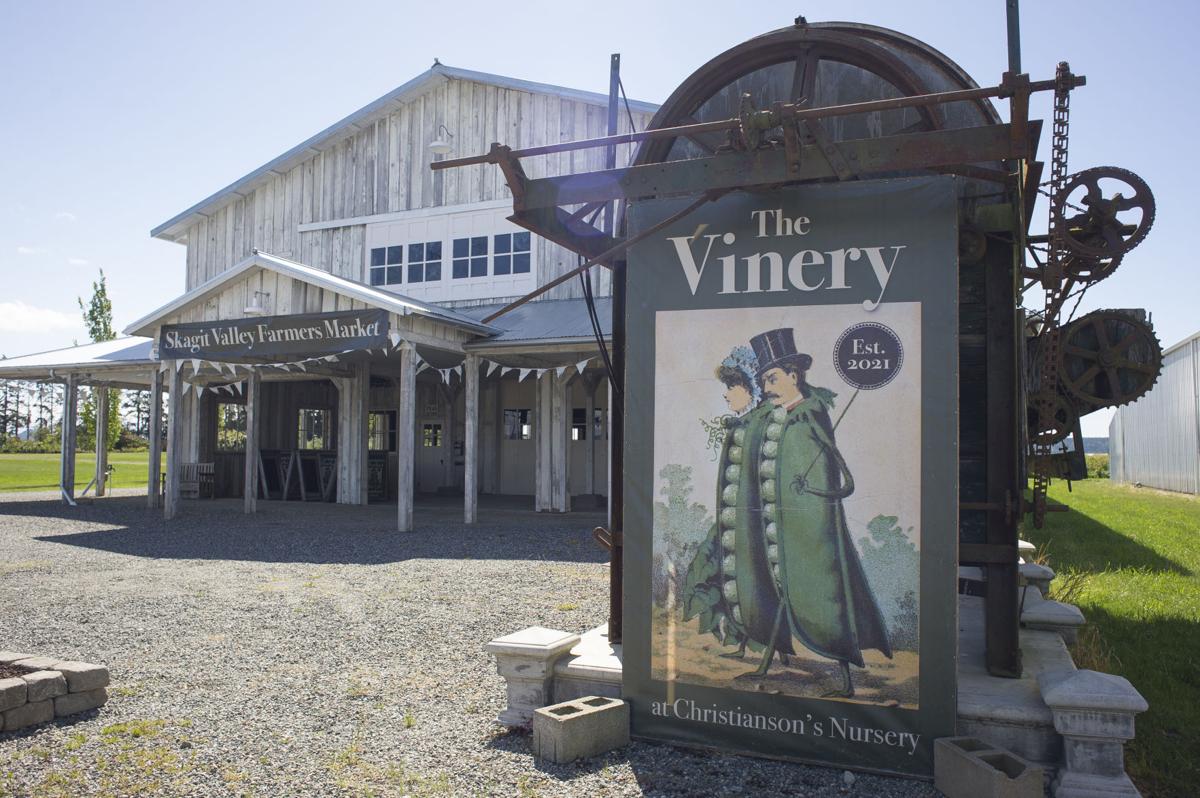 A sign advertising the newly-renovated The Vinery building sits Friday outside the building at Christianson’s Nursery & Greenhouse west of Mount Vernon. The building, which will hold events and a farmers market, was purchased by the nursery and transformed from its old use as a pea vining site. 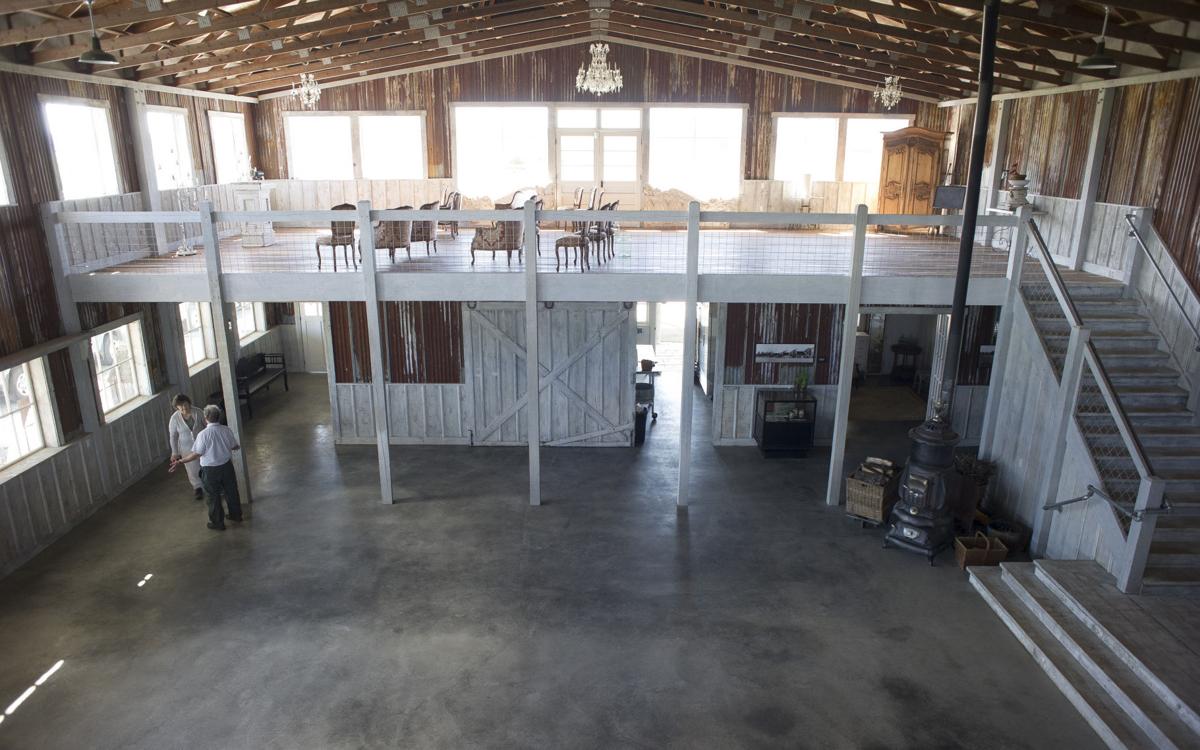 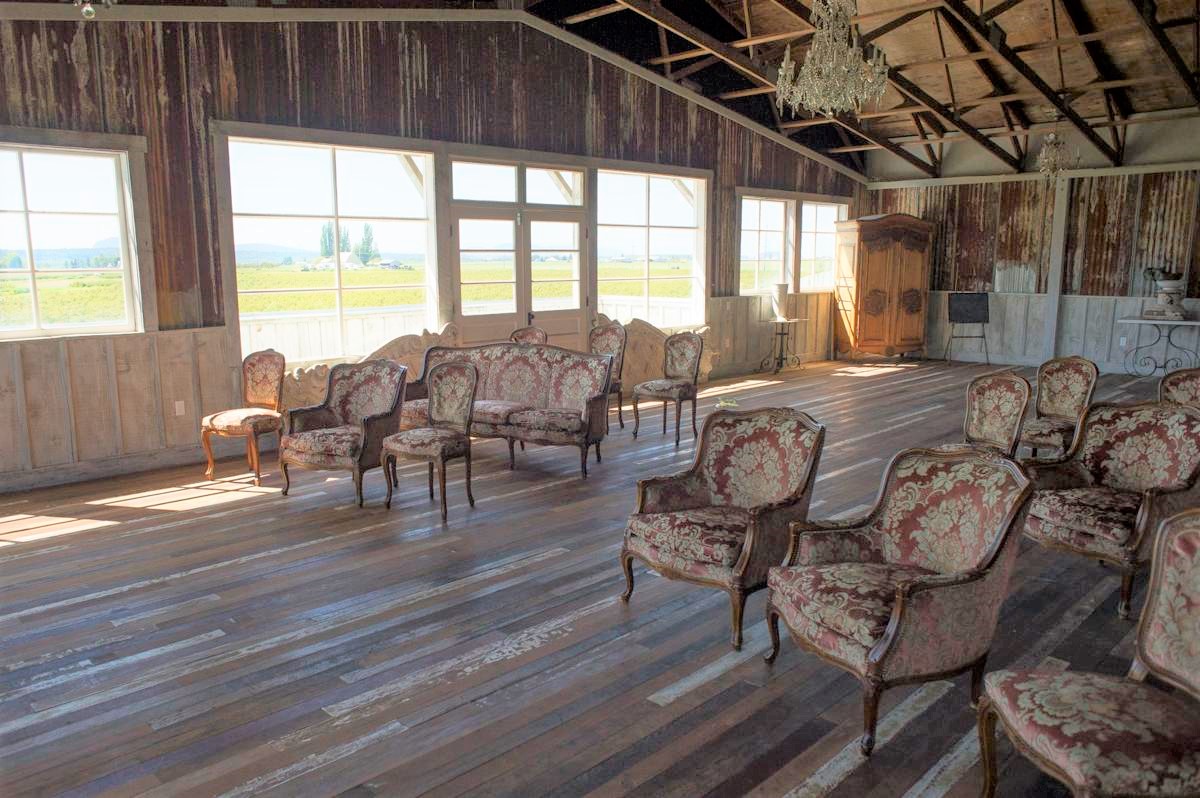 The Vinery building on Friday west of Mount Vernon. 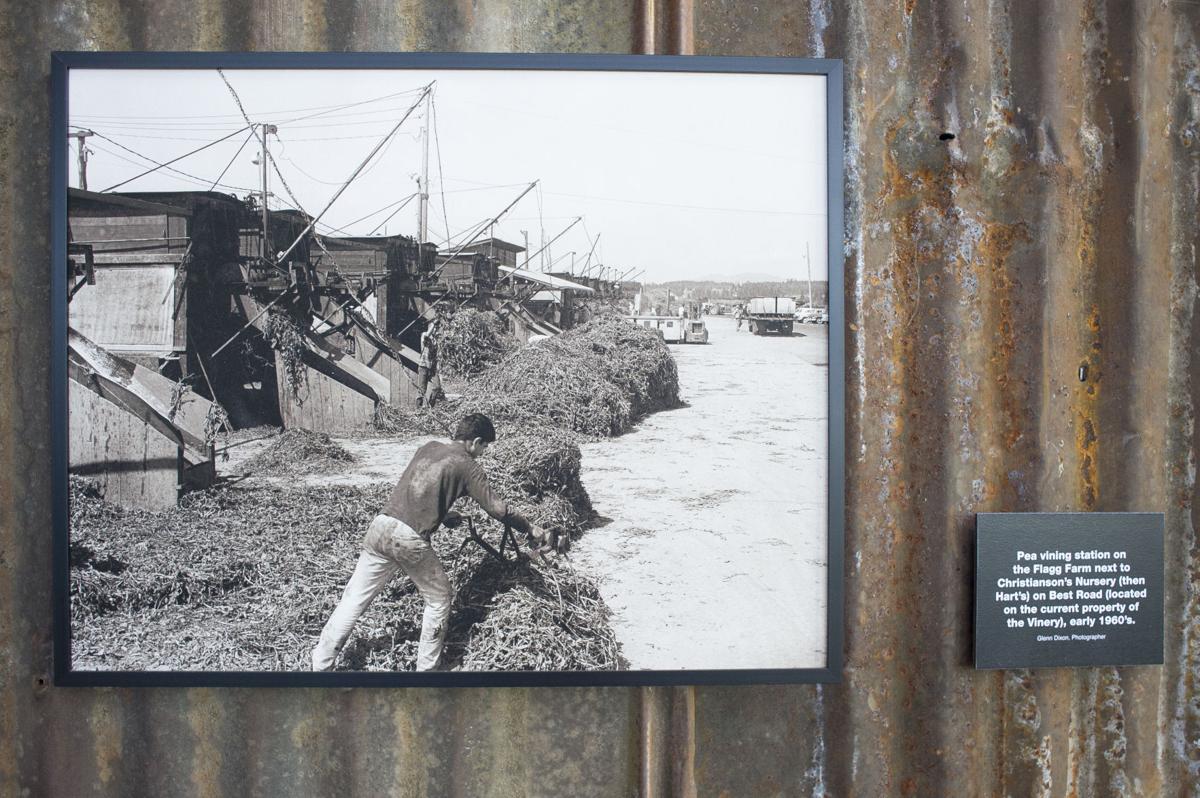 A photo of 1960s pea farming near the site of The Vinery hangs Friday on a wall in the building west of Burlington.

Farmers markets will continue at the site on Sundays through Sept. 26.  The new structure, called The Vinery to reflect the prominence of pea vining in Skagit County’s past, will not typically be open to the public but will be during the open house. There will also be live music and hayrides.  The Vinery began as a simple project, said Christianson, who co-owns Christianson’s with his wife Toni.  “The original plan was simply to enclose it to make a more useful storage building,” he said. “But as materials became available, it prompted a more historically appropriate approach.”  The main inspiration was lumber taken from a historic barn on Fir Island. Christianson said such buildings are popular, but expensive to maintain if they’re no longer used for their original purpose.  “You can save old buildings sometimes … piece by piece, if you can’t save the old buildings themselves,” he said.  Christianson sought era-appropriate additions such as recycled doors. He also kept an eye out for features that reflected the area’s past as a pea-vining site.  Kathryn Shiohira, Christianson’s Nursery marketing manager, said the work was diligently performed.  “It’s a huge, huge thing. The hinges (had) to be right, the doors … every piece and part has to be thought out. I don’t think there’s anything like it,” she said.

Green peas used to be a dominant crop in the county, covering 32,300 acres and accounting for about a quarter of what was produced throughout the country. The crop fell in popularity with increased demand for frozen peas, and the last processing plant was shut down in 2010.  “It seemed like every kid in La Conner, when they turned 16 they had a job,” Christianson said. “It seemed awfully cool to be in one of those pea viners.”  He said the Skagit County Historical Museum donated a stationary pea viner to display. The nursery’s special projects manager, Brenda Cornett, teamed up with the museum and How It Works in Anacortes to enlarge photos to display at the site.

Christianson said he hopes the Vinery will become popular as a rental site for weddings and other celebrations.  Just as much, he said he’s glad the nursery — home to other historic touches such as a building dating to the 19th century — can preserve another piece of the past.  “Everyone remembers those things until they’re gone,” he said.

Jacqueline Allison contributed to this story

The Skagit Valley Farmers Market at Christianson’s Nursery makes its debut May 30 on a site once central to the pea harvest on the Skagit Flats. The market will be open 10 a.m.-2 p.m. most Sundays through the summer.

The new kid-and-dog-friendly market will feature a nice mix of produce and crafts, says manager Kathryn Shiohira, who just happens to be a food safety specialist and a driver for the Puget Sound Food Hub right next door.

“The cool thing is these farmers are already set up and ready to go because to be part of the Food Hub you must have your ducks in a row,” she said.  The new market will take place around the Vinery, a new event space that will also be open for viewing on the 30th.

“When we renovated the building, we had a farmers market in mind,” said owner John Christianson. “There is no market between Anacortes and Mount Vernon and a market ties in nicely with our season, which peaks on Mother’s Day.”

The Vinery is named after the 24 stationary pea viners that once stood in front. Truck drivers brought pea vines from area farms so the machines could separate the vines from the peas. The peas went off to La Conner’s San Juan Cannery and other processing plants. The vines stayed behind in enormous piles on the property.  “The smell of the stacks fermenting was offensive,” said Christianson, “and the seepage of silage was toxic to ornamental plants.”  The smell is gone now, but beautiful photos of the pea harvest between the 1920s and the 1960s, when mobile viners made stationary viners obsolete, line the Vinery’s walls.  Some images were taken by the renowned Asahel Curtis, who was sent to photograph the Skagit Valley by the Great Northern Railway. Others were taken by the equally gifted but less-known local photographer Glen Dixon. One or two feature the Mesman farm at Chilberg and Dodge Valley roads.

According to Christianson’s Facebook page, the Vinery is available for weddings and other celebrations and is being offered on a complimentary basis for garden club and agricultural conferences and gatherings.  Besides the Vinery Open House, the market’s first day will feature produce, berries, cheese, cut flowers, bee products, jewelry, fresh espresso, wood-fired pizza, and hayrides.  “We’re thrilled to share the history of pea vining in the valley and have people enjoy a farmers market all summer long,” said Christianson.